There is a wonderful blog post over at Summer Thunder on the pros and cons of using the word "Warlock" to describe a male occult practitioner. I encourage you to check it out. The heart of the conversation revolves around two issues. First, that Warlock is a gendered term (a point the blog discusses brilliantly, but which I have little to say about here) and second that although it was originally a negative term it is worth reclaiming. The most likely original meaning of the term Warlock was "oath breaker". As the blog at Summer Thunder states its perspective:

"I like the term “Warlock”. It retains a counter-cultural charge, an unassimilated, deviating quality, some semblance of mystery and outlawhood. And it is a male term, and that is a valuable relief from the femino-centrism of so much neopaganism and Wiccan derived Paganism. It is not a term which speaks of male sacrifice, usable chivalry, soldiery and war service or a reproductive donation of sex or semen. Oath breaking is a good thing, when your oaths are coerced and in service to an oppressor. So I have to ask, if this term is an insult, who is it an insult to? A free man, or a good slave?"


I rather like the idea of reclaiming the term Warlock, complete with its revolutionary implications. However, I would like to reflect a little bit on an alternative (and admittedly creative) reading of the term that the post over at Summer Thunder doesn't explore.

Warlock takes on its meaning of "oath breaking" from its derivation from two terms. Wara, "truth" in Old High German and liogan, "lie" in Old High German. As the Online Etymology Dictionary points out, wara comes from the Old Norse for "vow" or "promise" thus providing us with the sense of Warlock as a "lying promise" or one who makes such promises.

We can imagine something of the Old Norse world from whence truth arises from oaths or promises. Recall, for example, the spear of Odin on which was engraved every promise and oath he had made. These oaths provided not just the foundation of his rule, and that of the gods, but the very foundation for what was to count as truth and reality for the rest of the cosmos. The oaths of the gods are the metaphysical truths of humanity.

Taken in this sense, the Warlock need not be some dishonest lier. Rather, he might be the person who can make the gods break their previous oaths, calling them to new ones. In doing so, the Warlock breaks truth in the sense of recrafting the very structure of reality. To play on my previous interpretations of magic as making the impossible actual, the Truth-Breaker makes what was previously impossible based on the seemingly stable truths of reality suddenly possible and actual. Breaking truth means rewriting reality.

At this point we might hear a resonance with the idea put forth in Paulo Coehlo's The Valkyries. In the book, in order to see one's guardian angel one must "break a promise". The promise one must break is the promise we all make at some point in our lives not to succeed. The promise to be realistic, the promise to settle for a "normal" and "reasonable" life, and so on. This is, I would argue, the promise that structures our entire experience of reality. It is in breaking this promise that the impossible first becomes possible. But, in shifting away from simply the idea of oath-breaking and towards the idea of truth-breaking I would like to shift as well away from a subjective understanding of the personal structures of our experience of reality towards the idea of breaking and changing the objective structures of reality. The truth-breaker is not, primarily, a mystic but rather a Warlock whose magic causes reality itself to lose its firm limits.

We might find, as well, echoes of the Warlock and Truth-Breaker in Aleister Crowley's concept of the curse of the Magus. The curse of the Magus is that she must always lie. Having achieved a level of transcendence beyond the dualistic structure of the phenomenal universe, all things are both truth and false for the Magus. As such, language itself is inadequate to capture the understanding (Binah) and wisdom (Chokmah) that the Magus has achieved and so all linguistic statements and teachings are a lie. We are clearly dealing here with a discussion of the nature of the Magus on the mystical register. The experience to which she is privy is beyond the grasp of word or image, as is the case with most mystical  experience. To understand her as Truth-Breaker or Warlock, however, is to see the activity of the Magus as instituting a new truth through the destruction of the old order of the world's truth. In this way, as also discussed by Nietzsche, all true creators are Truth-Breakers in an objective worldly, not simply subjective, sense.

In solidarity with the views expressed at Summer Thunder I agree that we should be proud to be Warlocks, Oath-Breakers and, at the highest levels, Truth-Breakers.
Posted by Kadmus at 8:07 PM 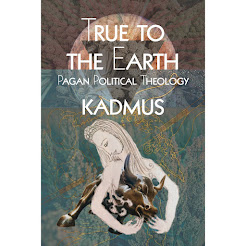